Some medical practitioners are of the opinion that medicine is serious business and that humor doesn’t really have a place in their marketing efforts to patients, because it might make a physician seem less than professional. While that point probably can’t be dismissed entirely, it’s also true that being extremely serious and grave about medical matters doesn’t do much to inspire patient confidence either.

In fact, most patients already have in mind the idea that anything to do with medical practice can be something fearful, and is something they should dread. This is due to the ingrained fear that most people have about finding out that there is some flaw in their health or some major illness or disease which might be taking control of their body.

A growing number of people in the medical profession are now swinging round to the opinion that a little levity in how a medical practice is presented to potential patients can be a very good thing. One of the biggest advantages of using humor is that it has the effect of humanizing your practice and allowing your patients to see you in a less imposing or intimidating light.

It can also have the pleasant effect of defusing that natural fear people have of visiting a medical office and finding out that their worst fears are confirmed. In any case, there’s little doubt that when humor is used in the right way, it can have a very positive effect on patient relationships, and it can even encourage online interaction with your practice.

Here are a few suggestions about how you can effectively incorporate humor into some of your marketing initiatives.

It’s not necessary to try and dredge up any kind of extraordinary or cutting-edge kind of humor when you’re trying to reach patients and present your medical practice in a positive light. The vast majority of readers will respond positively to simple puns, jokes, or cartoons, simply because they inject a little lightheartedness into what would otherwise be a fairly serious situation.

Original is Good but not Strictly Necessary

If someone in your medical practice just happens to be a budding cartoonist or animator, and he/she has a good sense of humor to boot, it might definitely be worth your while to engage their services to enhance your marketing efforts with some original material.

However, this is not a frequently-occurring scenario, so the original material is not at a premium when trying to devise marketing strategies. You can easily achieve the same kinds of results by using the recycled humorous material, but when you do so, make sure to cite the original source, so that you don’t get into any kind of proprietary issues. 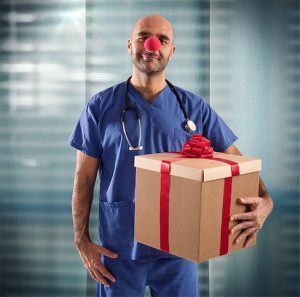 It’s important to keep the humor appropriate or else it could cause you to loose patients.

If you were to feature humor in every single post that you upload to the social media, or which you embed on your website pages, it wouldn’t be seen as special by your reading audience. In fact, if you made humorous material available every day, it might get to be boring to a reading audience and ignored altogether. By using your humorous content sparingly, each post that you make can come to be seen as a special treat by readers, and they might eagerly look for the next one in the series.

Jokes can be effective all by themselves as written text, but if it happens to be overly long, the joke will be on you, because very few readers will hang around for the punchline. That makes it important that you try to incorporate visual components to your humor because far more people will be engaged by visuals than they will be by text.

If you’re not sure where to find material like this, one great place to start looking would be on Pinterest, because they literally have a whole warehouse of medical cartoons and other offerings. As a matter of fact, there’s so much material there, that it might take you some time to choose what appeals to you, and which you think will have the greatest appeal to your target audience.

All your pins and images can be recycled for posting across any of the social media platforms which you’re currently active on, and that will be a great way to increase your reach in targeting new patients.

Make Sure Jokes are Appropriate

This almost goes without saying, but any humorous jokes that you present to your target audience should be 100% viewer-friendly, and they should not have the potential to offend anyone in your audience.

This might seem like a pretty simple directive to maintain, but in this day and age, it has become a much more difficult task, because it doesn’t take much to offend any specific segment of a given population. If you’re not sure about whether something might be offensive to anyone, it’s a good idea to run the idea past your staff personnel to make sure it’s completely inoffensive.

Brevity is the Soul of Wit

Truer words have seldom been spoken, because brief jokes, wisecracks, or any kind of humorous content, can be much more impactful on the listener, and can also help you avoid the possibility of losing them along the way. It’s good to keep in mind that all those short, humorous jokes you hear are popular for good reason – they are very easy to read or hear and to be understood without any effort.

Entertainers like Bob Hope, Rodney Dangerfield, and Henny Youngman practically made a career out of short one-liner kinds of jokes that were easily digested by an appreciative audience. While it’s doubtful that you could achieve the kind of reception of any of those mega-stars, you don’t really need to – all you have to do is catch their attention, have them appreciate your little joke, and then make a very positive association between their enjoyment of the humor and the genius writers in your medical practice.

Previous: Creating a Logo for Your Medical Practice
Next: Why Healthcare Digital Advertising is So Costly